The intervals in the A Minor chord are Root, Minor Third, and Perfect Fifth

Some books show this chord as:

The A Minor chord is composed of the notes A, C, and E

You can also learn how to play chord inversions.

Tones of the Minor chord:

Chord boxes are sorted from the easiest to the hardest. Learn how to read chord diagrams.

If you have difficulties with bar chord shapes, check the Bar Chords Tips tutorial. 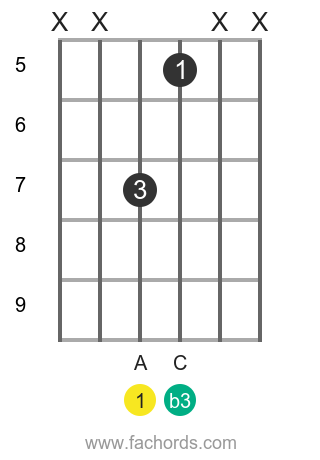 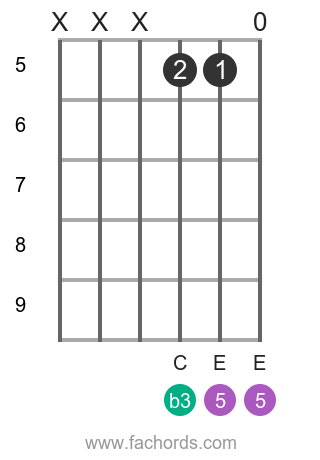 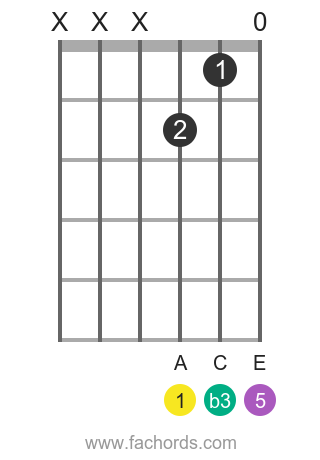 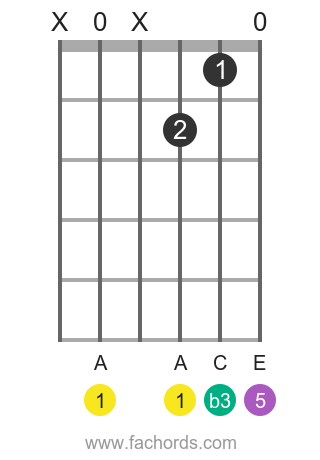 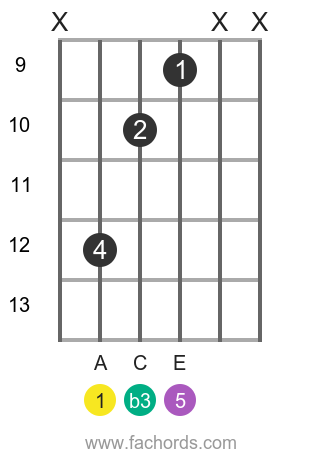 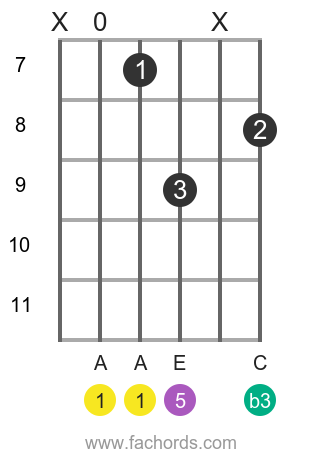 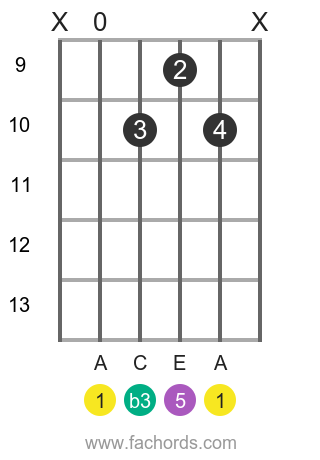 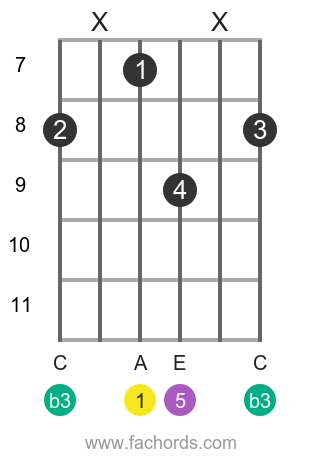 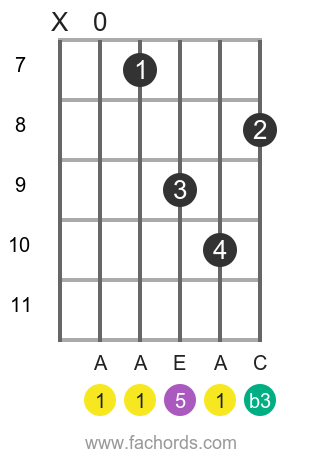 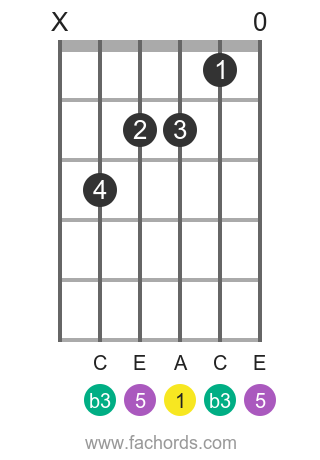 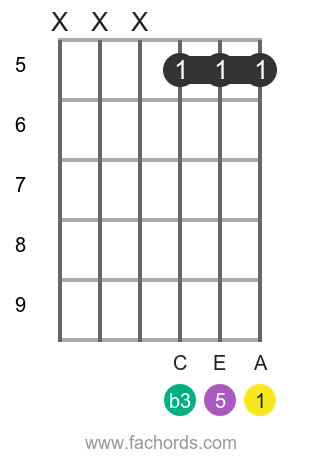 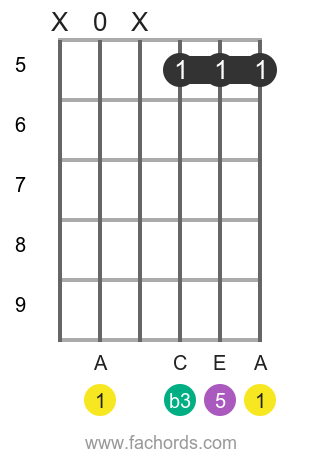 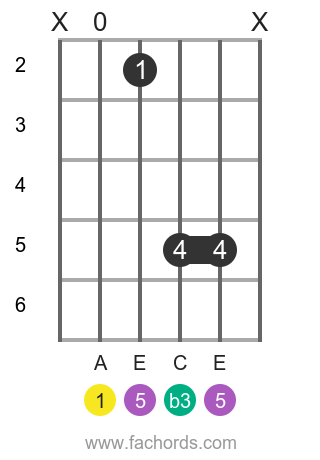 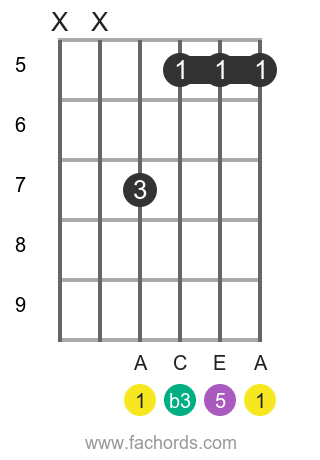 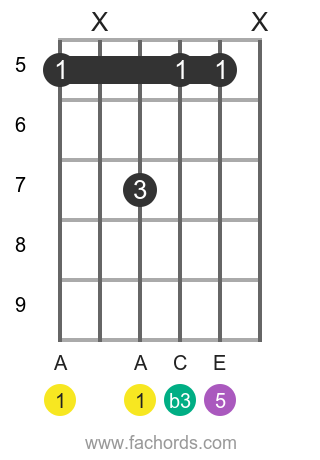 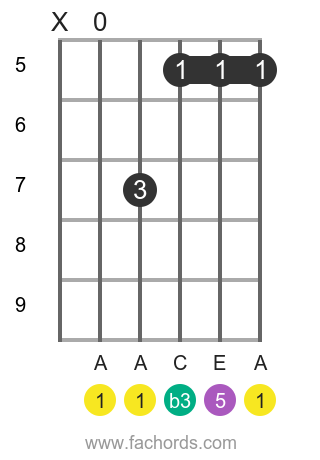 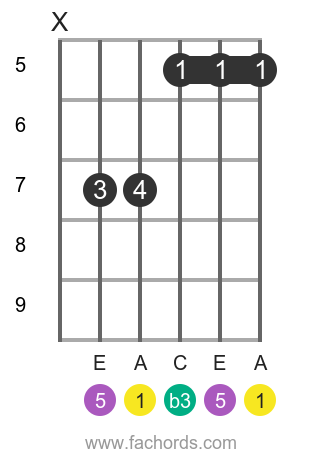 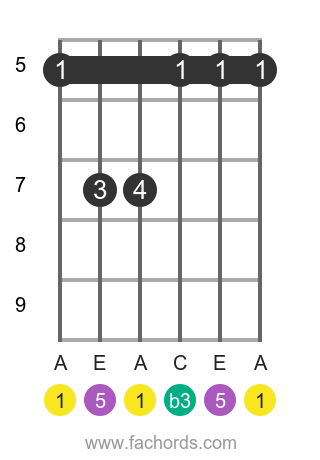 This fretboard map shows you the tones in the chord all along the neck. You can play this chord by choosing some of the chord tones.

The A Minor Guitar Chords | Keys and Songs

The A minor chord is one first chord you should learn. It pairs well with the C major chord, for two reasons: they are both parts of the key of C major, one of the most used key, and you can switch from one chord to the other by just moving the ring finger from the 3rd fret of the A string (C major) to the 2nd fret of the G string (A minor), back and forth.

As you can see in the following table, the A minor chord is the Submediant chord of the key of C, which is located at the 6th degree of the scale:

The key of A minor is relative to C major, so it has the same chords but in different order:

The A minor chord is present in the Axis of Awesome progression: C G Am F, probably the most used and over-abused chord sequence in the history of western world.

There are many other progressions that use the A minor chord, check my ebook 52 Chord Progressions | Learn How To Connect Chords and Create Great Songs for a complete reference.

Other Keys That Contains The A Minor Chord

The A minor chord is present in many other keys, here below you find the most used keys:

Here the A minor chord is the Supertonic, because is located on the 2nd degree

Here the A minor chord works as Mediant

In the E minor key, the A minor chord works as Subdominant.

In D minor Key, the A Minor Key has the role of dominant, notice how it well resolves to the root (D)

Songs with the A minor chord

On guitar, probably it is impossible to find a song that does not have an A minor chord somewhere.

Here's a quick list of songs that begins with an A minor chord:

This easy guitar songs list will show you more tunes.

Ok, be sure to master this chord really well because you'll encounter it many times in your guitar life. To learn anything you need about guitar chords, check my Chords Domination | Play Any Chord You Want Across All The Fretboard.