Modes are probably the most confusing topic of Music Theory, especially among guitar players.

After learning the most common guitar scales, such as the pentatonic, the major, and the minor, the next thing that usually we learn is modes. So let's have a look at the two main approaches in learning modes: relative and parallel methods.

Let's pretend for a moment that Modes do not exist, and, as an experiment, we take our beloved major scale and play it several time, but starting from a different degree each time (1, then 2, 3, 4 ,5 6, and 7):

How The Relative Approach Relates To Modes?

Probably you have already encountered the concept of relative minor scale: the scale built from the sixth degree of a major scale is called relative minor.

In the case of the C major scale, the relative minor is the A minor scale. Again, same note of the major scale, but played starting from a different degree (6th).

Let's now introduce Modes names. By expanding the concept of relative minor scale, we have:

You'll notice that the Ionian Mode is exactly the same of the Major Scale, and the Aolian Mode is another name for the Minor Scale.

At this point, guitarists usually learn how to play these seven modes on the fretboard, even if this relative approach only teaches 7 different ways to play the major scale (more later). With our scale finder, we have created the following patterns:

Of course, the relative approach works for all the keys.

For example, here are the relative modes in the G Major Scale (G A B C D E F# G):

Ok, so far so good; we have just seen that modes are just scales, each with its own structure and sound, but this is only half of the story.

The picture below shows all the relative modes display together: as you'll notice, they form a fretboard map of the major scale! To complete the puzzle, we also need the parallel approach (see below).

If we would stop here, modes would be just an unuseful complication: why bother with strange names if they share the same notes and we are just playing the major scale with different patterns?

To learn how to apply modes to real music, we also have to deal with the parallel approach

As an aside, parallel modes are at the foundation of modal interchanges, a way to make chord progressions more interesting.

By looking at the steps and half-steps in the relative modes table, we can derive the formula for each mode:

Like in chords, we can divide the modes in minor modes and major modes, by looking at their 3rd degree:

The minor modes are Dorian, Phrygian, Aeolian and Locrian (to be more precise, the Locrian would be a diminished scale because of the b5)

The major modes, the ones with the major 3rd, are: Ionian, Lydian and Mixolydian.

We can apply the parallel approach visually using our scale finder and shifting the mode patterns learned so far to the key of C. Pay attention to the shapes and to the note names:

Let's see now how to use modes in a context. As we have just seen, there are minor and major modes. The advice is to play a mode over a chord that matches some of its tones, in particular the 3rd.

Ionian, Lydian and Mixolydian scales over a Major chord

The C Lydian, Mixolydian and Ionian scales have the major 3rd, like the C major chord (1, 3, 5)

The C Ionian scale has no alterations, so it's composed of only natural notes.

The C Lydian scale contains an F# instead of an F.

The C Mixolydian has the 7th degree flat, so it has a Bb.

A Minor chord is composed of 1, b3 and 5 tones. Over a C minor chord, we can safely play the modes that have a b3 and a 5, such as the C Aeolian, C Dorian and the C Phrygian scales.

The alterations in C Aeolian are Eb, Ab and Bb.

The alterations in the C Dorian scale are Eb and Bb

Mixolydian scale over a Dominant chord

A dominant chord is composed of the 1, 3, 5 and b7. The mode that has a b7 and a major third is the Mixolydian, so this is a great match for dominant chords:

We'll see more practical application in a future tutorial, for now practice this stuff on different chords and keys.

The Modes adventure does not stop here. If we apply the same method (relative and parallel approach) to the melodic and harmonic minor scale, we get other modes with interesting sounds. The Harmonic Minor scale has the 7th degree (G#) raised by one half-step, while the Melodic Minor has the 6th (F#) and the 7th (G#) sharp.

Due to the sharp notes, if we apply the relative method to these scales, we get new structures: have your ever heard of Superlocrian, Phrygian Dominant, or Lydian Augmented scale? Now it's time to learn them!

For this purpose, I've created an interactive tool to help you visualize all the modes information: 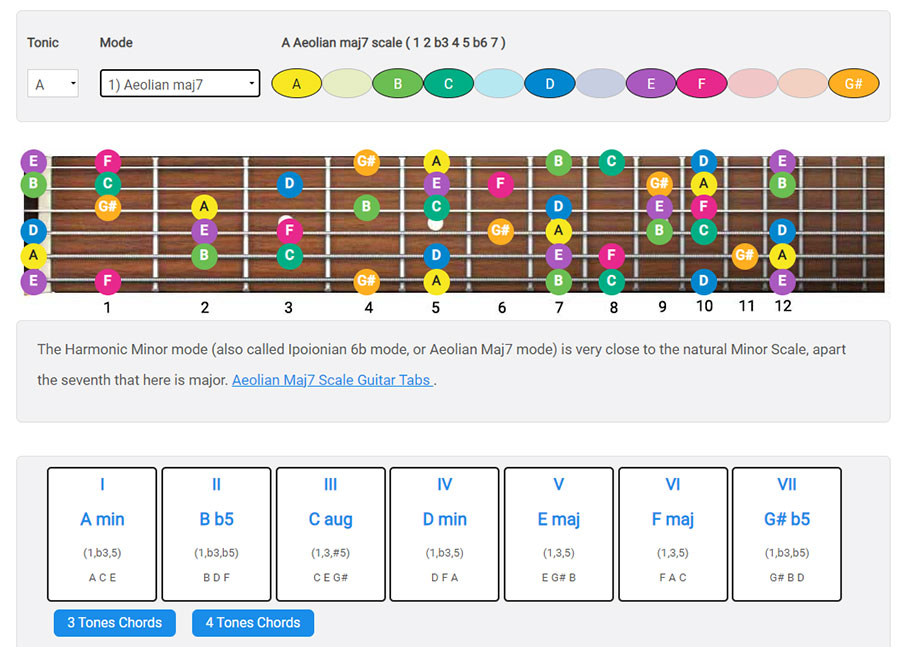 The Guitar Modes Interactive Chart will show you all the modes generated from Major, Melodic minor and Harmonic minor scales. For each mode, you'll find the formula, fretboard patterns, and chords; check it out!

That's all for today, if you want to stay updated on new guitar learning stuff, subscribe here!