What Is The Caged System: Tutorial and Interactive Tool

If you have been playing guitar for a little while there is a good chance you have seen the term CAGED , and if you haven't well you were bound to run into it. It essentially consists of learning specific chord shapes that can be applied across the fretboard .

Use the interactive tool below to see the shapes on the fretboard, or jump to the tutorial below .

This tool shows you how the Caged System works with the help of an interactive fretboard .

Click the button below and follow the step-by-step instructions. I suggest you to go back and forth to understand how the CAGED shapes overlap and connect each other. For a detailed explanation, go to the tutorial below . If you find this tool useful, check the Guitar learning software page.

Whether you play acoustic or electric, the guitar CAGED system is a method of navigating your way across the guitar. And before you can jump into some of the shapes you first need a quick review of major chords and barre chords. A major chord is made up of the first, third, and fifth notes of the major scale. So if we have a C major scale;

The C major chord is made up of C (first), E (third), and G (fifth). One of the first chords you learn is the open C X32010, it's called an open chord because a couple strings are not played.

Now imagine if you could take the nut and move it up one fret and with the same shape make a C# major.

Well we can't move the nut, but we can simulate it with our index finger .

This is called a barre chord, taking your index finger and placing it across all six strings and then playing the same chord shape.

If we barre the second fret and play this same C shape, we will have a D chord. Barre chords are not easy, they take a lot of practice and exercises to strengthen your finger.

The picture below shows you the 5 shapes that are the foundation of the Caged System. Notice how they overlap along the fretboard : 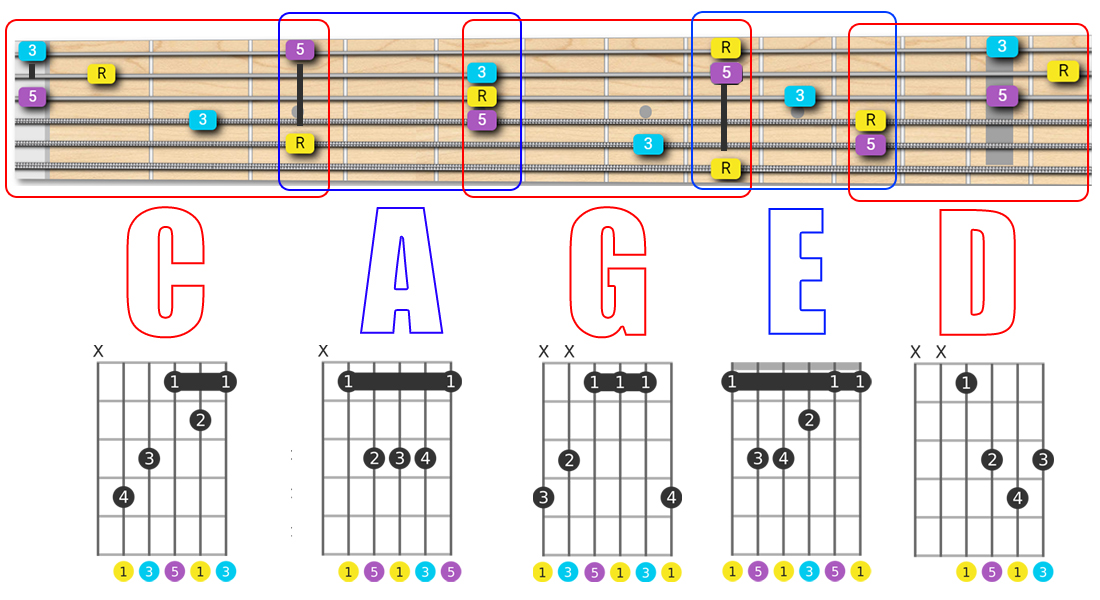 Below are the five basic shapes to learn. Once you know the shape, you can apply it anywhere along the fretboard assuming you barre the chord right .

But you don't just want to know the shape, you want to memorize where the first, third, and fifth are.

That way when you play arpeggios you can keep them in nice and clean patterns. 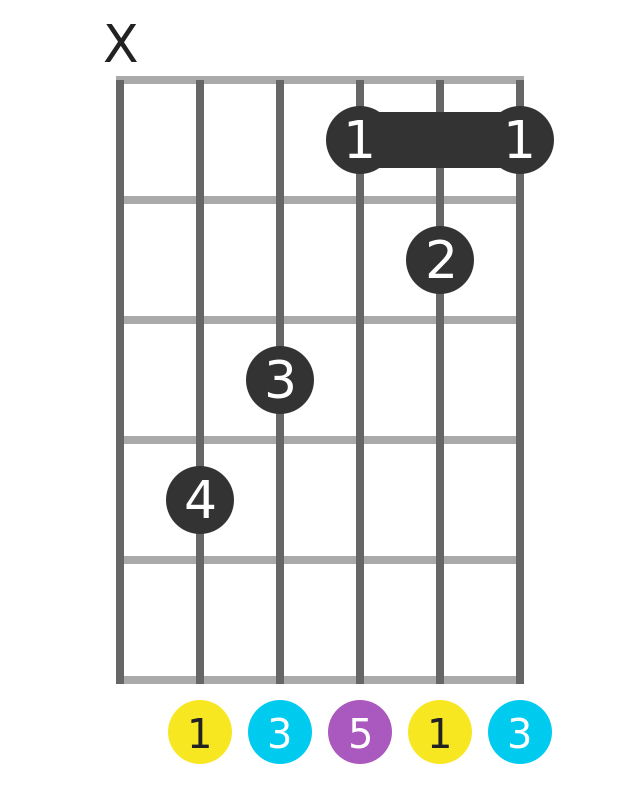 As mentioned, the C chord is X32010 the notes of which are XCEGCE so this pattern is;

Start a pattern on the open C chord, keep it simple just play the X320XX .

Now move that shape up to the fifth fret X875XX now you have an F major chord.

What you have just done was learn to play a simple backing rhythm and a potential solo. Yeah playing the first, third, and fifth in order gets boring, but this is how you start. 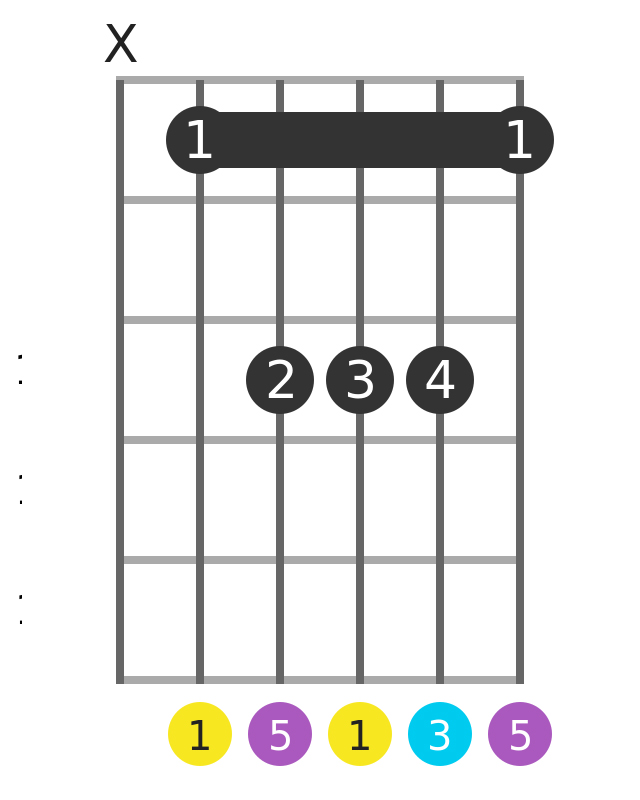 The A major shape is a lot more forgiving on your fingers, especially if you can barre it.

Just like the C we move this same chord shape up the fretboard.

In fact if we move up the three frets, we get another way (an inversion) of playing the C chord again!

Just like with the C shape above practice an arpeggio pattern using the A shape. 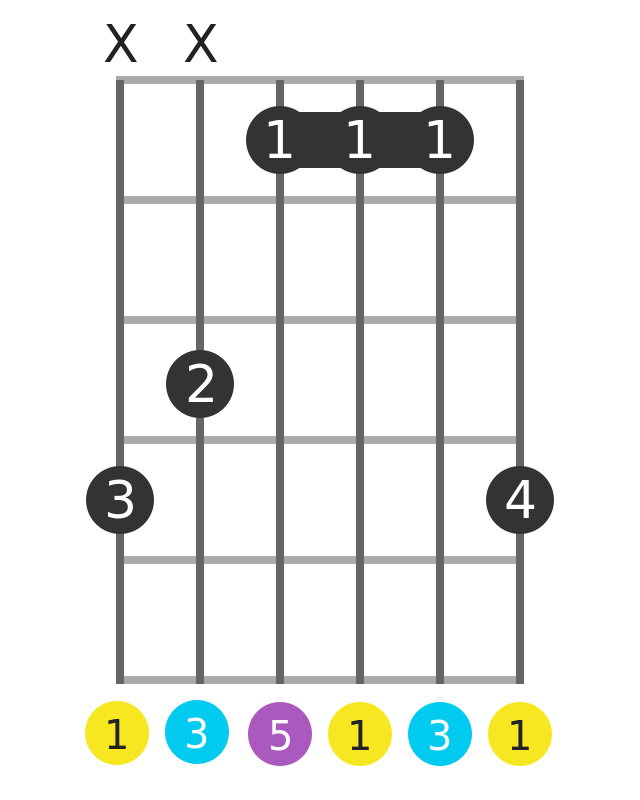 Don't worry if you need time to get those stretches, there are helpful shortcuts to keep you playing in the meantime, try playing only XX0003 that way you still have movable access to the shape.

Try different patterns of those bottom four notes as you move up the fretboard. 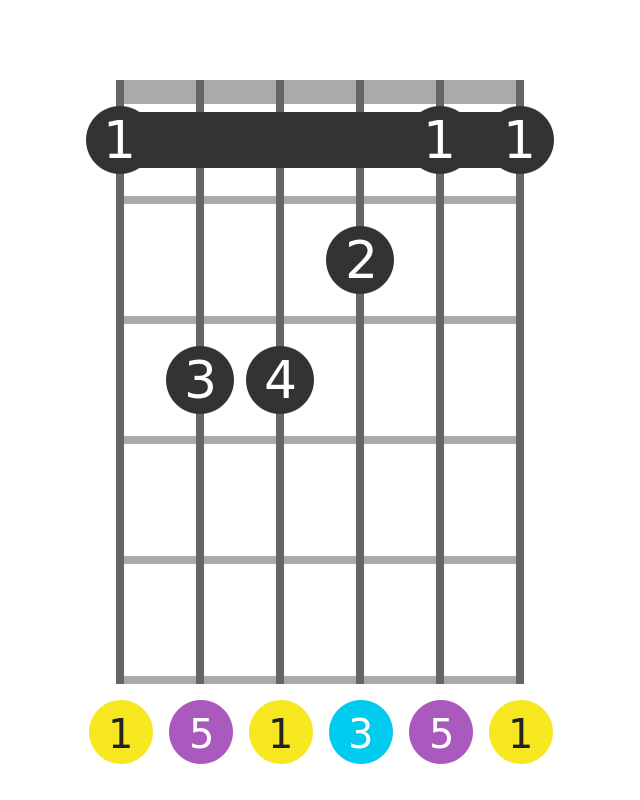 Again you can keep it simple at first and practice only the X221XX .

Move that up and down the fretboard.

So far you may notice some parts sound good while others don't this is how you learn a music key by ear! 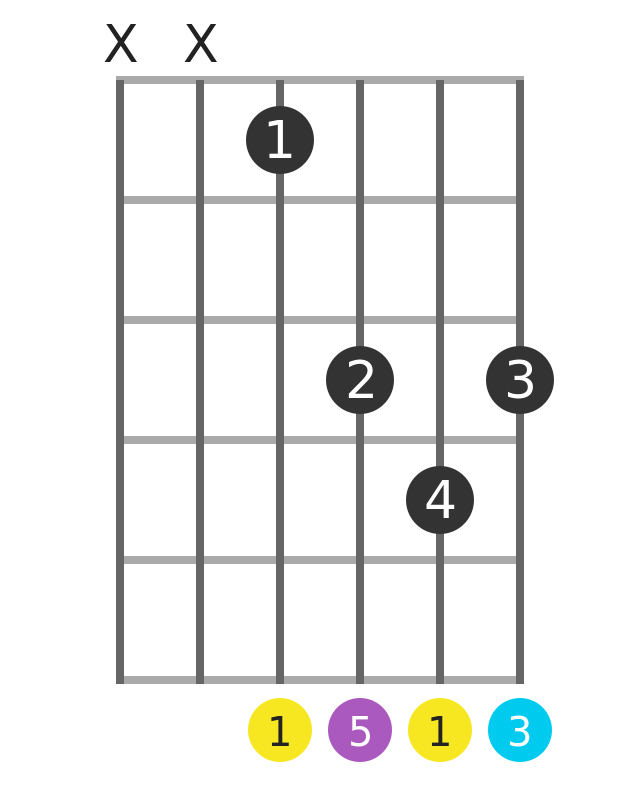 This is already a chord shape you might have known.

Of course as you get better with these shapes play more than just a few notes and expand your arpeggio patterns.

One of the immediate benefits of this setup is that it helps you quickly find notes in the right key and come up with different chord voicings, which is another term for a chord inversion.

While a C major chord is all the same notes, where you play it on the fretboard affects its sound.

There is another great benefit to the guitar CAGED system, it is a perfect for learning arpeggios .

When you play individual notes of a chord instead of strumming it as a whole, it is an arpeggio. When you hear a heavy metal shredded guitar solo it is often made up of repeated high speed arpeggios.

Finally, you will be forced to practice barre chords , which beginners often avoid as they aren't easy.

The same goes for backing rhythm guitar, arpeggios are everywhere!

There are some opponents of the CAGED system, because all you learn are major chords and your arpeggios will always be combinations of the first, third, and fifth notes . This can get boring fast.

However I find a compromise is necessary on the CAGED system. Learn the basic system, practice it, but don't over rely on it.

As a guitar student it's fine to start your first solos and arpeggios in the major key.

After you have the CAGED system down you can escape the cage and fly away free to try other fretboard navigating methods .

For example, you could learn other intervals and apply them to the CAGED system. Do you want minor chords ? Well, a Minor chord is composed of the Root, the Minor Third and the Perfect Fifth. So you just have to lower by one fret all the Major Third in the CAGED map.

Use imagination and creativity to see the fretboard in new ways .

Once you have each shape memorized you can do more than just play the same shape up the fretboard. For example the key of G has the chords G, C, and D. With these three chords we can play a lot of pop and rock music.

First play all open G, open C, and open D. Now let's say you need to play this same chord progression in the key of A. Well then, we just move the G, C, and D shapes up two frets . With the same shape order we now have the key of A with A, D, and E.

The guitar CAGED system will not only help you navigate, solo, and arpeggiate; it will also teach you some music theory!

There was every chance when you started this article that you already knew how to play the chords C, A, G, E, and D. Now thanks to this system we can find any major chord we want!

You don't want to play an open C? Ok, then make the A shape and move up three frets and you have another C chord voicing. It is that simple.

And as mentioned you can now work your way up the fretboard playing arpeggios. Pick a pattern that sounds good and play it along different frets, even if you don't know what key to play in, play what sounds good together.

After you have a grasp on arpeggio patterns you can start to slowly solo. Yes, it is true that it will be in major chords and your sonic variation will be limited.

But the simple fact is the guitar CAGED system is a great way for a beginner to start understanding and practicing the concept of arpeggios and solos.

Be sure to request your free access to the download area and get our printable chords and scales references.