When it comes to stringed instruments students aren't often taught just how important the strings are . In some cases good strings can make a cheaper instrument sound better, that is how great of an effect they can have.

In this article we will go over some of the basics on strings for acoustic and electric guitars.

Depending on the material, strings will have a specific effect on the sound. However just like the wood used there are always multiple factors involved in the final sound we get from our guitar.

Before we mention specific materials stop and think about the difference between an acoustic and electric guitar.

The acoustic is light hollow wood that relies on a large string to be plucked so the sound can carry. While the electric wood is solid and needs to pick up a magnetic signal from vibrating strings so that it can amplify the sound.

Original guitars used guts , literally animal intestines . You can still buy gut if you want, but it is expensive and honestly modern tech sounds better! These days they have nylons and other fluorocarbon plastics to take the place of gut.

Classical guitars cannot handle much tension so you must use nylon strings .

That's why classical is a great beginner guitar because it is easier on the fingers!

Acoustic guitars can handle more tension because they have more bracing. It is common for them to have steel strings ; however the steel is wrapped in brass or bronze (referred to as phosphor bronze). Brass is usually brighter in sound.

Electric guitar strings are mostly made of steel and/or nickel , often the core being steel, and the thicker strings being wrapped in nickel.

The steel makes for a bright sound while the nickel enhances the lower tones.

Other important terms to know are roundwound vs flatwound , which are named based on how the strings are formed.

Most strings are roundwound but many jazz players prefer flatwound , for the warmer tone. However, flatwound strings are more difficult to bend because they have less grip.

The construction difference can be seen here: 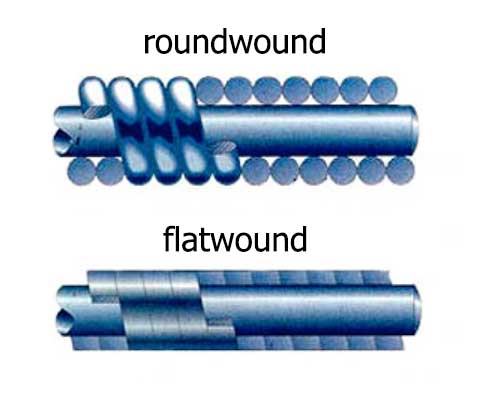 Sometimes you will also see strings with or without coating. Which means the metal is coated in some modern space age polymer. Coated strings are a matter of personal preference that you have to play and hear to know if you will like them.

It's important to know that acoustic guitar string gauges are not the same as for electric guitars. A light gauges on acoustic is 12s , while on electric is 10s , have a look at the tables below:

The gauge is simply the thickness of the string and of course the thicker the string the harder it is to play ! Acoustic guitars have thicker gauges for a fuller sound and are harder to press down. An electric has smaller gauges for light as a feather touch and fast playing. It is actually good hand strength practice to play acoustic if your main guitar is electric. When you start playing that electric again it feels like nothing! 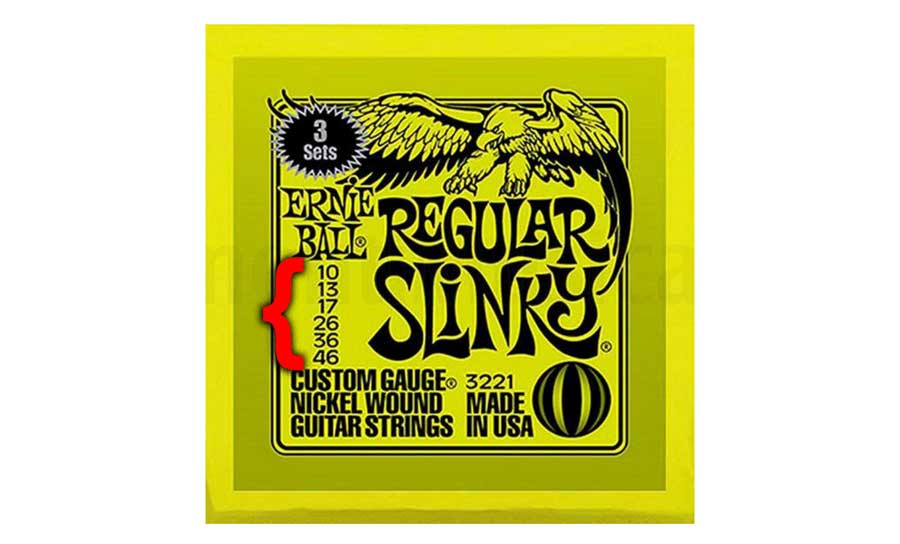 What is the thickest and thinnest guitar string gauge available?

The thinnest gauge is .008 inches (8s on electric guitar) and the thickest is .059 inches (56s on acoustic guitar)... Wow! it is wise to stay away from both extremes. (Of course the genre of music you like will be a factor in the thickness too).

When to change your strings will be up to you, but every six months to a year is generally fine. If you like to experiment with new sounds, try new brands as often as you like. If you buy a guitar and it doesn't come set up with nice strings it is advised to put a new and better set on. Don't be cheap with strings , they will make a huge difference in your sound.

Here you find an easy tutorial on how to change strings.

Is there anything to revitalize guitar strings?

While there are a number of urban legends on revitalizing strings the reality is you have to keep them clean from day one . If you come across an old instrument don't even attempt to keep the strings, instead replace it with something similar and new. Depending on the string material you will always want to keep it wiped down with the appropriate cleaner. You should already be wiping your fretboard down often , so the strings should be cleaned too.

If you absolutely have no choice but to use old strings, well sometimes it happens. But in general don't attempt to reuse old strings. If you really want to recycle and reuse your old metal guitar strings you can always do something creative like guitar string jewelry !

The biggest limitation on changing strings is usually instrument build and string gauges. Of course you now know if you put steel strings on a classical that it will break it ! But there is more to it than material. If you try to put a string gauge in the nut that doesn't fit you will change the guitar intonation.

On an electric guitar, the best strings for beginners are nickel wound and with gauge 10-36 (light gauge).

With acoustic guitars, bronze strings are good for novices, with a size of 12-46 (light gauge)

Even though you now have the basics of guitar strings down, it still can be a little confusing so look to your heroes for help . Just like using a similar guitar model of the greats you can also use the same strings. In many cases well-known guitar players have their own line of strings . And even though they aren't all the best quality at least it gives you a starting point. 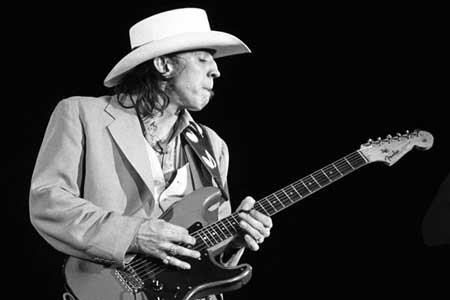 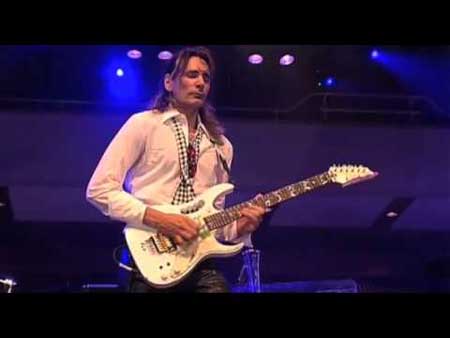 And some artists that preferred light gauge strings are Joe Satriani, Steve Vai , Yngwie Malmsteen , and Frank Zappa . If you notice both light and heavy gauges are used in the same genres.

Some people argue that gauge means a better tone , but clearly some famous guitarists prove them wrong . Strings of all sizes and materials can have multiple uses.

This ends our post on guitar strings. We've seen the differences between acoustic and electric strings , the various gauges, and how they are denoted, plus some tips on how to choose strings and their correct maintenance.

At the end of the day it is up to you to play what you like.

If you find the small steel gauges are breaking easy, move up a number. If you notice your acoustic sounds better with phosphor bronze compared to brass, then pick strings with more of the former.

Just make sure when trying new strings the nut and build can handle them. Over time you will find a set that makes your guitar sing!