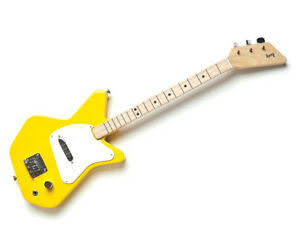 Usually when parents want to start a child on guitar the advice is to wait until they are bigger, or maybe even start them on a ukulele. Generally most guitars are way too big for a kid , and the small ones are usually toys that have no real playing value.

Now that has all changed thanks to Loog Guitars and their three stringed child size instruments . These tiny guitars are made to be fun and easy to play, with an emphasis on getting the young student to play songs from day one.

Over the years there have been a number of small six string guitars and they have usually not worked due to poor sound and being hard to play. It is surprising that it took so long for someone to finally make a proper guitar aimed at young children .

Loog Guitars started as an academic project which then morphed into a successful Kickstarter campaign in 2011. They realized that most small guitars were made with six strings which is much too wide of a fretboard for a child to play, so they wanted to build a kids guitar.

It was also obvious that many kids were often given a ukulele as they were easy and the right size for small hands. However as great as the ukulele is, it is not the same as a guitar , so what were young students supposed to do to actually learn a guitar? Their answer was to cut the regular amount of guitar strings in half.

Still allowing a child to play triad chords and get the basics of guitar down without the extra width. The idea clearly worked as they have grown in popularity and have great reviews.

The Loog mini is for ages 3 and up and it is roughly 22 inches long and about 2lbs . The body is made of real basswood , while the neck and fingerboard are made of maple . The strings are made of nylon and the action and intonation are incredible for a kid’s guitar.

Intonation means every fret makes the proper note. If the first string is an open G than the first fret will be a G#, the second fret A, and so on up the scale. Usually instruments made for children can barely hold their tuning yet alone have any proper intonation. The Loog Mini is built with actual playability in mind so you can be sure your kid is learning music and not just boringly strumming on an awful sounding instrument. 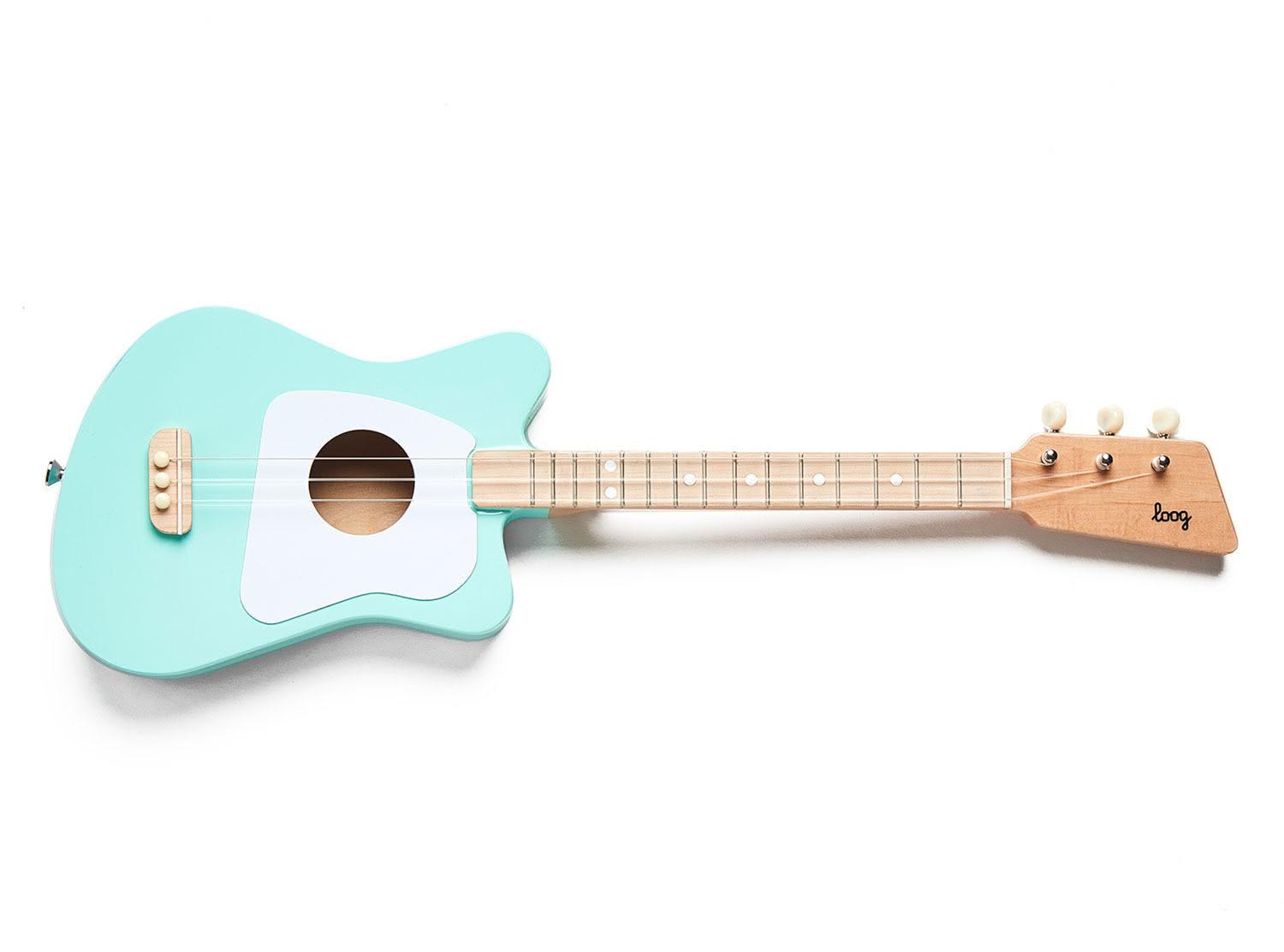 The Loog Pro Acoustic guitar is for ages 8 and up and has a larger body and twice the weight of the Loog Mini. It is about 29 inches and also made with basswood and maple. This Loog actually uses steel strings which is something you would never be able to do with a ukulele of the same size.

Like the other Loog models it has three strings which are tuned GBE , the same as the high treble strings on a normal size guitar. It also has low action and excellent intonation. It is a great way to prepare a child for an adult acoustic once they are big enough to handle one. 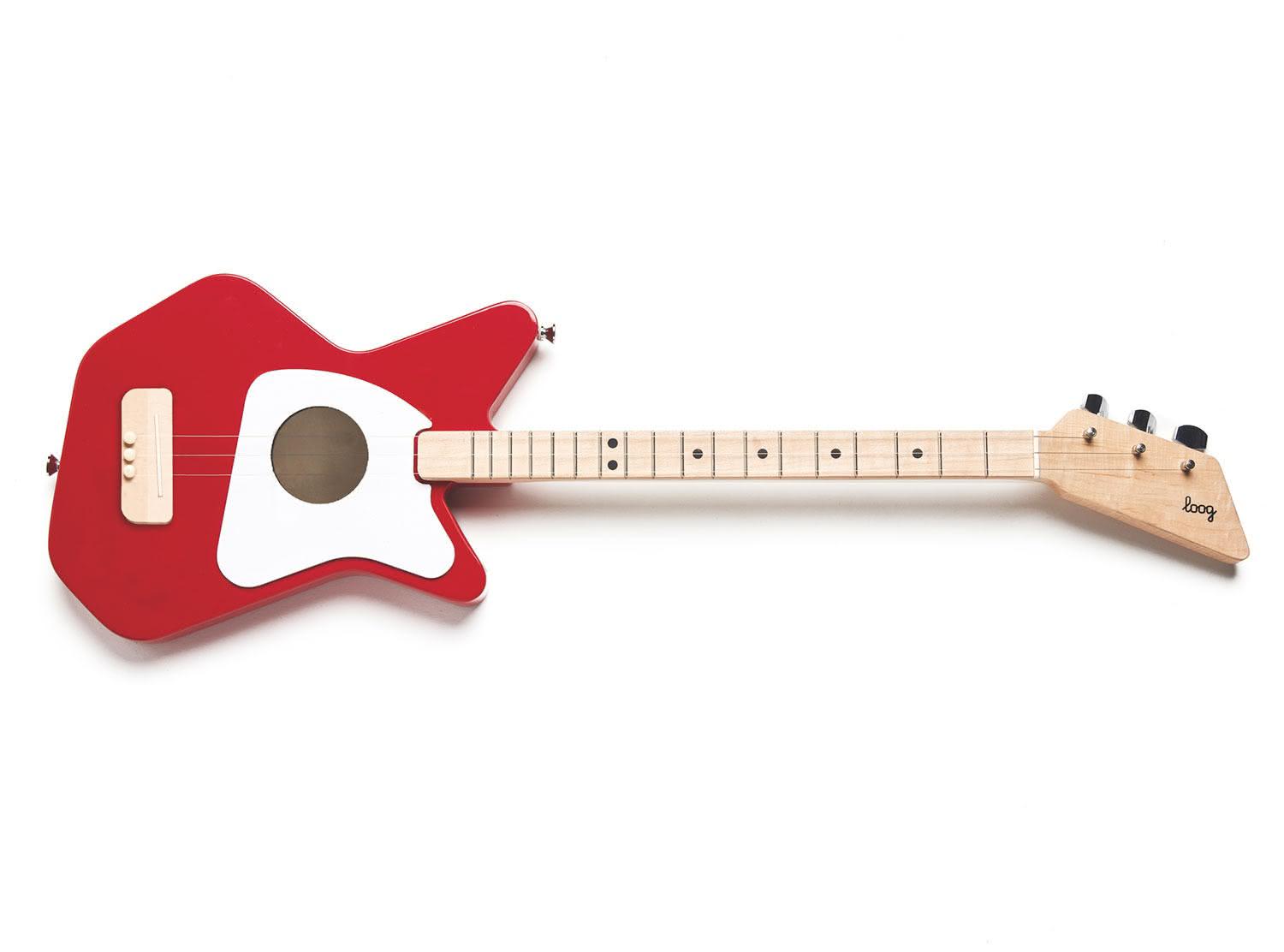 The Loog Pro Electric guitar is also for ages 8 and up. It is made of a wood known as paulownia and the neck of maple like the other Loog guitars. It has three steel strings, the same as the acoustic and with the same great action and intonation as the others.

The Pro Electric can be played without amplification , yet is has a pickup ready to go when you do wish to plug it in. This model is a Loog electric guitar designed by Paul Frank . It is essentially all the other three models (Mini, Pro Acoustic, and Pro Electric) except with friendly art and designs for children . Basically the same Loog guitars but with some flare. 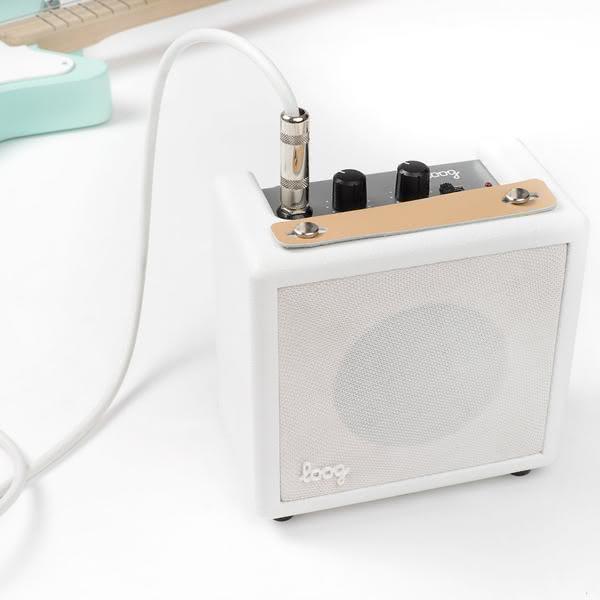 Along with the guitar you can buy a Loog mini amp, strings, straps, wall hangers, stands, and tuners. The strings are a little on the pricey side but necessary for these specific instruments. When you purchase a Loog guitar you will also get access to the Loog app with a songbook, lessons, and a tuner . One accessory that is included with each new purchase of a Loog Mini and Loog Pro guitar is a set of chord flashcards. The flashcards are perfect for children with colorful pictures and chord diagrams . These chord diagrams also contain specific numbers that correlate to each finger, that way your child knows exactly how to play the chord.

There are 24 cards all together , covering all the major and minor triads of all 12 keys. The Loog Chord Flashcards are a simple but effective way to learn playing their new guitar.

While it is not easy to do on full size guitars, if your child is left handed the Loog strings can simply be reversed . They also encourage children to experiment with different tunings of the three strings. By using different tunings they can get a blues sound, metal, and even punk power chords.

The sole purpose of the Loog is to teach a child music and there is no better way than when kids discover how different notes sound in relation to one another.

By learning the fretboard and chords on a three stringed guitar they will be prepared later for an adult sized instrument.

As mentioned, it is amazing it took so long for someone to come up with an idea on how to get a guitar into a child’s hands. And it turned out to be such a simple instrument made of real wood and producing great sound . Besides fantastic playability they also come in multiple colors and designs.

As if that wasn’t all great news, they are also very affordable , roughly the price of a beginner ukulele so you will not break the bank. With so many great features in such a small package it is no wonder they are so popular. And it is honestly even fun as an adult to play, they are pretty cool little guitars!

The only problem with their popularity is the fact that they often sell out ! It goes to show how many people have bought Loog guitars for their children when the stock is low or gone.

If you have a child that has an interest in music, don’t buy them some unplayable toy that can’t hold a tune.

Get them a three string Loog that will fit their size and age. In no time at all you will set them on a path for highly developed music skills later on in life, and most of all they can have fun doing it!

At the moment, Loog Guitars is running a Free Shipping on all orders, learn more here